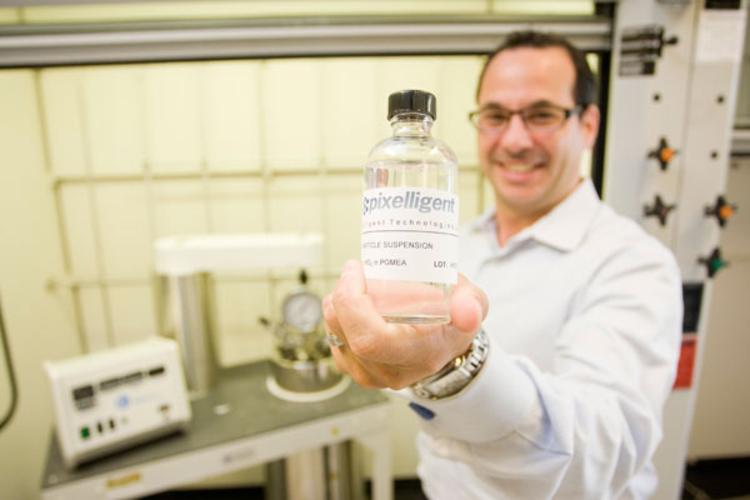 Craig Bandes and Pixelligent could have chosen a lot of places to establish roots upon moving out of an incubator in the University of Maryland, College Park.

Despite being courted by economic development officials in Montgomery County and Northern Virginia, Baltimore was the top pick because of its history and base of manufacturing workers, as well as the ideal space being open in the Holabird Business Park.

Now, the company is looking to bring Baltimore into the new school of manufacturing. Pixelligent builds technology that helps make the elaborate hand-held devices we have come to depend on even faster and more efficient. Bandes spoke with the Business Journal about it days before Pixelligent was set to move into its space in southeast Baltimore, the former home of Guilford Pharmaceuticals.

BBJ: To a layman, what does your technology do?

Bandes: We’re essentially a next-generation additive company. Just like when you buy your motor oil, you pay more for additives that make your engine run better. We’re making a new class of additives that makes polymers and solvents work at levels they never have before, significantly improving functionality. The delivery mechanism is called nanocrystals. They add structural stability and thermal capabilities. As computer chips are getting smaller and smaller it’s getting harder and harder to do etching on them. We’re working on using our additives in a “hard mask” material to make them better and enable the industry to move to the next generation of chip manufacturing.

BBJ: Was your technology based on University of Maryland research?

Bandes: The genesis of it was the founder, Greg Cooper, got his Ph.D. in physics from the University of Maryland, but when he went through the program he followed an interdisciplinary approach with advisers in both the physics and chemistry departments. When he got his Ph.D. he thought the world of nanotechnology was starting to be an interesting place to create new technology.

BBJ: What has been the growth path?

Bandes: Like many nanotechnology companies that started about a decade ago, the company has gone through a couple of different iterations and different technologies to get where we are today. Things they were doing back in 2000 are pretty unrelated to what we’re doing now, but it’s all part of the learning process to get to applications that do have commercial viability. The real evolution of the company that took us to where we are now was in 2007, the company started working on the first big award from the National Institute of Standards and Technology. It was a $2 million award to use nanotechnology to create new materials for the semiconductor industry.

BBJ: Where do you see the industry going in the future?

Bandes: I think the two areas we’re focusing on first, this additive for microlithography, we think it will help the semiconductor industry continue to drive to higher performance computers. The other application we’re working on is coatings for high-brightness LED lights. The idea there is to create a new coating that improves the efficiency, providing more light and letting the bulbs burn less hot